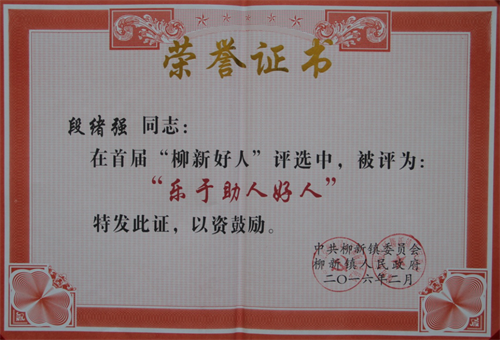 A few days ago, the annual "Liuxin Good People" selection activity held by the Liuxin Town Party Committee and Liuxin Town Government, a pilot town for expanding power and strengthening towns in northern Jiangsu, was announced. More than 100,000 people in the town's jurisdiction participated in the selection, and Sifang Boiler Holdings Chairman Duan Xuqiang and other 47 business leaders, ordinary villagers and migrant workers won this honor.

The gold cup and the silver cup are not as good as the reputation of the people.This event is set as the selection sub-items of "Liu Xin Good People" such as being helpful, brave in doing justice, respecting the elderly and filial piety.Since the establishment of the company, Duan Xuqiang, chairman of Sifang Holdings, has been donating money to school every day for ten years. Take the responsibility of caring for poor students and contributing to the society.