Wang Baohua, deputy general manager of Wuguo Group, and his party came to our company for inspection and guidance 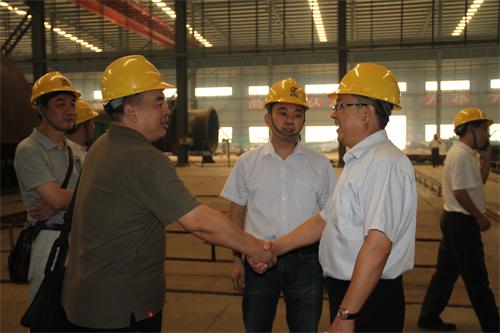 On the afternoon of August 21, Wang Baohua, deputy general manager of Wuhan Boiler Group Co., Ltd., and his team of 4 people came to our company to visit and inspect and guide the work.Ren Shaoyong, Dean and Deputy General Manager of the Company's Environmental Engineering Design and Research Institute, received and accompanied the visit and introduced the situation.After visiting our company's boiler manufacturing, serpentine tube and membrane wall production line and other production sites, the two parties conducted preliminary negotiation on the cooperation of Wuguo Group's serpentine tube production outsourcing and other business projects.

At about 4 o'clock in the afternoon, Duan Xuqiang, chairman of the company, who was receiving the inspection of the leaders of the Provincial Quality Supervision Bureau at the production site, shook hands cordially with Wang Baohua and his party, and took a group photo.

Wuhan Boiler Group Co., Ltd., formerly known as Wuhan Boiler Factory, was founded in 1953 and put into operation in 1956. It is a large-scale backbone enterprise producing power station boilers in China. It ranks first in domestic boiler manufacturing with Haguo, Shangguo, Dongguo and Beijing Bawei. echelon.(office)