The China Economic Trends Index for the the year, jointly compiled by the China Economic Trends Research Institute of the Economic Daily, the China Economic Prosperity Monitoring Center of the National Bureau of Statistics, and the Institute of Quantitative and Technical Economics of the Chinese Academy of Social Sciences, was released today.2018second quarter of Same as the first quarter, there are a total of 1 representative industries and fields collected by the Industrial Prosperity Index in this quarter, 14including coal, petroleum, electric power, steel, non-ferrous metals, non-metallic mineral products, chemicals, automobile manufacturing, IT equipment Manufacturing, medicine, and clothing 11are specific industries, and at the same time cover 3the comprehensive fields of energy, materials and industry—— 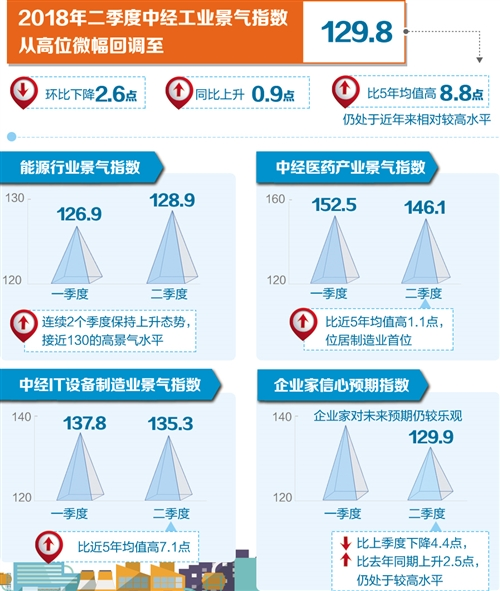 In the first half of 2018, the added value of industrial enterprises above designated size increased by 6.7% year-on-year , a percentage point slower than that in the first quarter 0.1, and a percentage point faster than that of the whole year of last year . The 0.1industrial operation remained within a reasonable range.Faced with multiple pressures such as economic restructuring and Sino-US trade frictions, although the short-term industrial growth rate has declined slightly, the industrial fundamentals have not changed.my country is in the late stage of industrialization and is shifting from high-speed industrialization to high-quality industrialization. The growth rate is within a reasonable range.On the whole, in the first half of the year, the industrial operation was stable, the economic benefits of enterprises were continuously improved, the industrial structure was continuously optimized, the new drivers continued to exert force, the role of domestic demand was gradually strengthened, and the quality of economic development was gradually improved.

The industrial boom is running smoothly

In the first half of 2018, the overall industrial prosperity index ran smoothly, operating in a relatively high prosperity range.2018In the first quarter of 2019, the China Economic and Trade Industry Sentiment Index was 132.4the 2013highest level since the beginning of the year.In the second quarter, the industrial climate index slightly recovered from a high level , with a month-on-month 129.8decrease 2.6, a year-on-year increase 0.9, and a higher than the 5annual average 8.8, still at a relatively high level in recent years.4From month to 6month, the growth rate of industrial production was 7.0% , 、6.8% and 6.0% respectively , and continued to 6% to 7% , maintaining a relatively stable operation.fluctuate in the growth range of This is mainly due to the solid advancement of the supply-side structural reform, which has improved the market supply and demand relationship in the resource industry, and the continuous development of new kinetic energy such as high-tech, equipment manufacturing, and strategic emerging industries.

On the whole, affected by factors such as the continuous advancement of supply-side structural reforms and the rise in international oil prices, the national ex-factory prices for industrial producers rose by 3.9% year-on-year in the first half of the year , an increase of 0.2a percentage point over the first quarter.In the second quarter, the producer prices of industrial producers decreased by 0.2% , increased by 0.4% and increased by 0.3% respectively from the previous month.This increase was mainly caused by the rise in the prices of means of production. The means of production in the second quarter changed from falling to rising month-on-month, down 0.2% , up 0.5% and up 0.4% respectively.。

The ex-factory prices of high-tech industries showed a certain differentiation trend. In the second quarter, the year-on-year price increase in the pharmaceutical industry continued to expand, and the year-on-year decline in the IT equipment industry continued to expand.The producer price of the pharmaceutical industry increased by 2.7% year-on-year, for consecutive quarters.7showing an expanding trend From a month-on- 4month to month 6month perspective, the producer prices in the pharmaceutical industry rose by 0.2% , 、0.1% and 0.4% respectively from , showing a continuous upward trend.IT equipment industry fell by The producer price of the 2.5% year-on-year, for consecutive quarters.3showing a downward trend However, 4on a month -on- 5month basis, the 6month respectively, IT equipment industry decreased by producer prices of the 0.3% , remained unchanged and increased by 0.1% in the month, month and and also showed a trend of mild recovery from falling to rising.

In the second quarter of 2018, the total profits of industrial enterprises maintained rapid growth, up 16.7% year-on-year, higher than the previous quarter .0.6a percentage point The increase in corporate profits was mainly due to the month-on-month increase in the prices of industrial products, the cost reduction brought about by the tax and fee reduction policies, and the continuous increase in the utilization rate of industrial capacity.On the one hand, the prices of coal, steel, nonferrous metals and non-metallic minerals have all risen to varying degrees due to the deepening of supply-side structural reforms and the improvement of the supply-demand relationship in resource industries.On the other hand, since the beginning of this year 3measures to deepen the value-added tax reform, projects to support innovation and entrepreneurship, and the development of small and micro enterprises, which have reduced the operating costs of enterprises and created more profit space for enterprises.7, a large number of tax and fee reduction policies have been introduced intensively, including 1From month to 5month, the cost per 100 yuan of main business income of industrial enterprises above designated size is 84.49yuan, a year-on-year decrease of 0.31yuan.Lower operating costs create more profit margins for companies.In addition, in the first half of the year, the national industrial capacity utilization rate reached 76.7% , an increase of 0.3one percentage point over the same period of the previous year.

While the total profit has risen, the profitability of industrial enterprises has also been further enhanced.According to estimates, the sales profit rate of industrial enterprises in the second quarter was 6.5% , an increase of 1% over the same period last year 0.4.In terms of different industries, the profit margins of resource-based industries such as coal, petroleum, chemical industry, and non-metallic mineral products are 12.0% , 、7.8% , 、11.7% , and 、11.1% , respectively. The profit margins of high-tech industries such as medicine and automobile are also significantly higher than the industrial average.

The data shows that the business order prosperity index in the second quarter was 1,000 points 84.2higher than that in the first quarter 0.2, of which the export order prosperity index was 86.8basically the same as the previous quarter.At the same time, the situation at home and abroad has become increasingly complex, and the external pressure on industrial growth will increase in the second half of the year.Judging from the statistics and local surveys in the first half of the year, the impact of the Sino-US trade friction on China's industry has not yet appeared, and the impact is limited.According to statistics, the export delivery value of industrial enterprises above designated size increased by 5.7% year-on-year .This is due to the fact that the current economic development dependence on foreign trade has been continuously reduced, and the supporting role of domestic demand has been strengthened.Last year, the export delivery value only accounted for about 10% of the total industrial output value.The issued by the United States, whether it is 500100 million US dollars or 100 million US dollars, accounts for less than 2000list of additional tariffs 1% of the total industrial output value .Although it will have a big impact on some export-oriented regions, industries and enterprises in the short term, it is difficult to produce subversive changes to the global industrial division of labor and competitive advantages that have been formed in my country.

Entrepreneurs are still optimistic about future expectations. In the second quarter, the Entrepreneur's Confidence Expectation Index was lower than the 129.9previous quarter 4.4and higher than the same period last year 2.5, still at a high level.In terms of different industries, high-tech manufacturing, equipment manufacturing and other industries with industrial structure upgrading, and food manufacturing and other consumption-upgrading industries have higher confidence expectations for entrepreneurs.This reflects that consumption upgrade and industrial structure upgrade continue to promote the industry, the market demand for industrial products remains stable, and the industrial economy is resilient.

On the whole, the fundamentals of industrial development have not changed, and the role of industrial structure optimization and consumption upgrading has gradually become prominent, which has brought opportunities for the industrial economy to seek progress while maintaining stability.In the short term, we must pay attention to balance and prevent major risks. In the long term, we must strengthen core technology research and drive high-quality industrialization with innovation.Overall, the industrial economy is expected to continue its steady growth in the third quarter.