July 1 this year marks the 92nd anniversary of the founding of the Communist Party of China.The company's party organization held a symposium to celebrate the 92nd anniversary of the founding of the party in the party member activity room.About 20 current Communist Party members and party activists of the company participated in the forum.Ye Feng, deputy secretary of the company's party organization and general manager, attended the meeting to give a speech. The meeting also performed the voting procedure of probationary party members Ma Zhenhu and Comrade Ren Shaoyong. Participating party members actively gave speeches at the forum, and Secretary Luo Yu made a concluding speech of the event.Committee member Wang Mingyue presided over the symposium.
At 5:30 that night, the company's party member activity room was brightly lit. Above the map of the huge organization activity park, the "Jiangsu Sifang Boiler Celebration Symposium on the 92nd Anniversary of the Founding of the Party" was marked with white characters on a red background, which was particularly eye-catching.Around the conference table, the participating party members sat around and talked cordially, and the scene was filled with a festive atmosphere.At about 6 o'clock, the host announced that everyone stood up, and the symposium officially started with the majestic "National Anthem".
First of all, Ye Feng, deputy secretary of the company's party organization and general manager, made a passionate impromptu speech.He briefly reviewed the history of the party, combined with the company's party building work and economic work, and further clarified the responsibilities and missions of the Communist Party members under the new situation.All the Communist Party members of the company are required to carry forward the glorious tradition, keep in mind the sacred mission, build an image in the two civilization construction of the company, and be a pacesetter than dedication.He also looked forward to the party building work of our company in the future.Next, in accordance with the "Basic Principles for Developing Party Member Voting Work", all Party members performed the voting procedure on the applications of the reserve Party members Ma Zhenhu and Ren Shaoyong to be turned into regular members. Party members, the audience applauds and congratulates.In the following discussion speeches, the participating party members described their understanding of the party and their work experience based on their own situation and their own work. Work hard, be at the forefront of corporate culture and economic construction, be a pioneer, and build an image.
According to the agenda of the symposium, Comrade Luo Yu made a concluding speech of the event.In his speech, he first emphasized the importance of this event, and asked everyone to study and understand the spirit of Secretary Ye Feng's speech based on their own actual conditions, congratulate the two party members on behalf of the party organization, and fully affirmed the discussion speech of the party members.On this basis, three requirements are briefly put forward for all party members of the company: first, keep in mind the mission and further strengthen the sense of responsibility for participating in the development of the enterprise; second, strengthen learning and further improve their comprehensive quality; third, pay attention to dedication and further develop The example and leading role of the Communist Party members.(office) 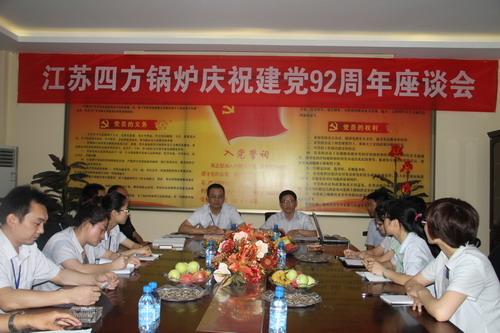 The picture shows the conference venue