According to from research firm Bloomberg NEF (BNEF) , the latest authoritative data 2018global clean energy investment in the third quarter of 2019 was 678US$100 million, down 6% from the same period last year.。 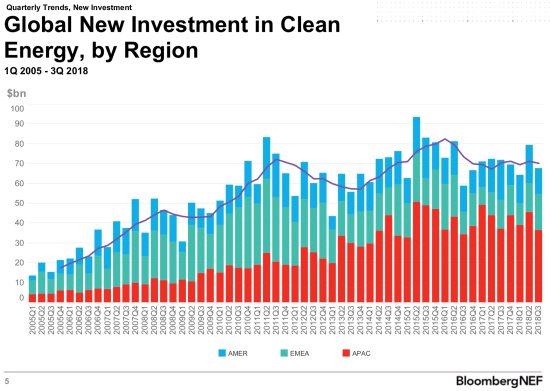 The dip in the July-to- 9March quarter pushed investment in the first three quarters of the year down 2% from a year earlier , but also leaves open the 2018possibility that the year overall will eventually match last year's total, especially if dozens are completed by Christmas. billion dollar offshore wind deals.

head of transport analysis at BNEF Colin McKerracher , , said more money was chasing China's electric vehicle boom."We are seeing more and more companies raising capital as they look to jump from concept to mass production. But the market is looking more and more crowded and consolidation is likely to occur."

Looking at Q3 global investment data by type, asset financing for utility-scale renewable energy projects reached 493$100 million 2017, down 15% from the third quarter of the year , while purchases 1MW totaled of small solar systems less than 135$100 million, up a year ago 9%。

Venture capital and private equity VC/PE investment increased even more, reaching 378% , with a cumulative scale of 24US$100 million.2018Venture capital and private equity funding for specialty clean energy companies has reached 75$100 million in the first nine months, making this 2011the strongest year at least for the year.2018The six largest VC/PE new equity deals so far this year have all involved Chinese electric vehicle companies, including the two mentioned above.

By country, China was once again the largest investor in clean energy in the third quarter, with 267US$100 million, slightly higher than 2017the figure for the same period last year.However, there is another sign of an important change in expectations: China's 531PV policy has slowed the growth of solar installations in the country.In the third quarter, Chinese solar investment was 142US$100 million, down 23% year-on-year。

Other countries and regions that invested more than $100 million in clean energy in the third quarter 10were:

Europe 134billion US dollars, an increase of 1% year-on-year;

India 15billion US dollars, an increase of 14% year-on-year;

Turkey 12billion US dollars, a year-on-year increase of 25%;