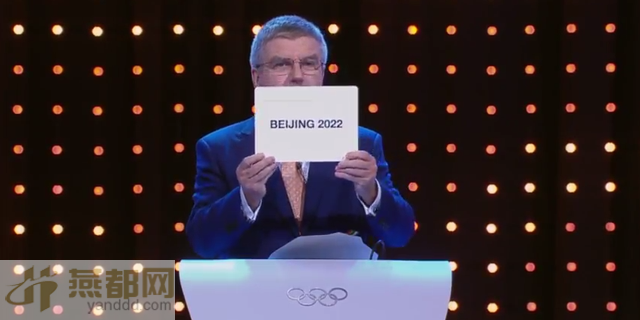 Beijing wins 2022the right to host the Winter Olympics

in Kuala Lumpur, Malaysia 128, IOC President Bach announced that Beijing, China has won 2022the right to host the 242018 Winter Olympics.The people of Beijing celebrate with joy, and " people from all directions " are happy.

The successful bids of Beijing and Zhangjiakou for the Winter Olympics will undoubtedly create history, and it is highly compatible with the national strategy of Beijing-Tianjin-Hebei coordinated development being pursued by the Chinese government. As a result, the positive impact on the national economy and people's livelihood will be varied and varied.

Once, "APEC blue " was 2014an online buzzword of the year, which means that due to the convening of the APEC meeting, the air quality in many parts of North China has improved significantly.Air quality has always been a problem Beijing is determined to solve.

In less than a of waiting for 2022the Winter Olympics to be held , when the 7year " Winter Olympic Blue " will arrive has become a more concerned issue.

2. Beijing-Tianjin-Hebei integration " governance of the atmosphere "

It has been more than a year since the coordinated development of the Beijing-Tianjin-Hebei region has become a national strategy, and the drumbeat of cooperation between the three places is getting closer and closer.At present, Beijing and Zhangjiakou jointly bid for the Winter Olympics, which will provide a new shortcut for the integrated development of the Beijing-Tianjin-Hebei region.

At present, Beijing-Tianjin-Hebei and other places have started relevant governance work.Beijing Mayor Wang Anshun stated that he should use the determination of a strong man to break his wrist to control the air.

According to reports, 2013from year to 2017year, the Beijing government will directly invest 400more than 100 million yuan, driving the total social investment 7600of 100 million yuan to control the atmosphere.Seven years later, there is great hope for "APEC blue " to survive and " Winter Olympic blue " to show up.

It is not easy to increase the blue sky.Beijing Mayor Wang Anshun said: 2013Beijing issued a five-year investment 1300of 100 million US dollars " Clean Air Action Plan " .The move has reduced the city's total coal burning by in the past two years alone .30 percent and eliminated 100more than 10,000 high-emission vehicles In addition, experts also analyzed two other reasons: First, the coordinated development of Beijing-Tianjin-Hebei has become a national strategy, and atmospheric environmental governance is an important ;content . " Neighborhood " the governance of Hebei and Tianjin.

Zhangjiakou is known as Beijing's because of its good ecological environment " back garden " .Focusing on greening, transportation, and atmospheric control, we will make every effort to make up for " shortcomings " and speed up the implementation of key projects related to the Winter Olympics.

Vice Premier Liu Yandong of the State Council bluntly stated in his speech on the bid for the Winter Olympics that our bid process is highly in line with the national strategy of Beijing-Tianjin-Hebei coordinated development being implemented by the Chinese government.It is foreseeable that with the bidding, preparation and holding of the Winter Olympics, a major breakthrough will be made in the integration of Beijing, Tianjin and Hebei. The construction of transportation facilities will shorten the geographical distance ;and rationally divide labor between regions, and promote regional development ;to strengthen cooperation in atmospheric governance and environmental protection. , cooperate in the control of smog.

In recent years, we have helped the capital to fight smog and achieved "APEC blue " , and once had a contribution from our Sifang boiler.On the Guo Jinlong, Secretary of the Beijing Municipal Party Committee, personally inspected the operation site of Beijing Yongan Thermal Boiler, and praised the operation of our company's boiler products.

In the Beijing market, we have a good performance, close partners and valuable experience accumulation.

Fighting fiercely in the boiler market in Beijing, Tianjin and Hebei, we have a wealth of market experience and accumulated corresponding project experience.Fostering strengths and circumventing weaknesses, seizing opportunities, expanding in consolidation, and having the courage to share " Winter Olympic Blue " has become a top priority.the big cake of

So, the question is: to help " Winter Olympic Blue " , what should we do?There are five of them:

First, we must make efforts in marketing decisions.Looking forward to the market effect brought by the national economic integration development policy of Beijing, Tianjin and Hebei, it is recommended to further integrate advantageous resources, strengthen sales management, and increase market development, consolidation and expansion on the basis of carefully summarizing the experience and lessons of business activities in this region in recent years. The required institutions, personnel, expenses and other inputs, improve and strengthen the rapid response and follow-up service mechanism for market information in the region, and capture, " feed " , implement, and bear fruit for large projects in sales decision-making and mechanism. Provide strong support.

Second, we must make efforts in technology research and development.According to the practical and reliable market product information, implement the R&D positioning of product categories, gather superior R&D forces, have plans, goals, initiatives, and incentives to fulfill, seamlessly connect sales orders, and ensure the technical support for the contractualization of target projects.

The third is to make efforts in project management.To grasp large projects and based on the whole process control, engineering companies should comprehensively sort out and summarize historical projects, especially on the basis of the experience and deficiencies of the projects in the Beijing market, to identify the causes of specific problems, refine the nodes of experience and lessons, and further improve corresponding measures. The formulation, change, improvement, follow-up, supervision and implementation of the related plans at each stage of the project are continuously adjusted and accumulated to continuously strengthen the overall execution of each project in the region.

Fifth, make efforts in team building.The strength of the overall execution of the team fundamentally affects the quality of the promotion and implementation of various strategic decisions of the company.In this regard, every member of the company has a heavy responsibility and responsibility.In particular, all management personnel must firmly establish on " Sifang " , dedicating " Sifang " , and benefiting from " Sifang " , and taking the company's the values ​​of being based "8.1" mobilization meeting as the driving force to further improve the internal and external The understanding of the situation further strengthens the firm's confidence in seizing new opportunities, seeking new breakthroughs, committing to the grand goal of great development, and striving to overcome the difficulties and disturbances caused by traditional thinking, objective stereotypes and individual differences, and always keep a high degree of concentration. Based on the company's decision-making and deployment, based on the work requirements of their respective positions and departments, strengthen responsibility, actively learn and learn from, pay close attention to work implementation, consciously develop a good habit of being pragmatic, efficient and meticulous, steadily promote the level of team building, and continuously enhance the overall Execution, and make their respective contributions to winning the tough battle of production and operation in each stage and period.

The brave who meet in the narrow road wins.To welcome the Winter Olympics, embrace " Winter Olympic Blue " , help the integrated development of Beijing, Tianjin and Hebei, share the big cake of the regional industry market, and seize the historical and market opportunities that are rare in a century.To make a new contribution to the blue sky and clear water of the capital, Sifang Boiler has the strength and responsibility, and it should not be let down; " Sifang " is duty-bound, and should give a resounding answer with their own powerful actions!